Who published your book? Athena Press

What inspired you to write the book?
My 9 year old son Ryan; He was falling behind in his english and wouldn't read any books. His english teacher knew I wrote short stories and said why not write a book. Ryan loves wizards and so I wrote the book.

What is your favorite chapter in the book and why?
Shore of Shallow Water is my favourite chapter because it's an impossible situation the wizards are faced with and they do escape.

Do you have other books you have written? If yes, what are they?
Wizards' Kingdom is a trilogy with WK being the first, The Obelisk of Ashmar book 2 (2006) and Jarraks Darkness book 3 (2007).

Is there a particular event that stands out to you that helped you become an author?
Yes, I wrote 26 short stories which were put on a publishers website. One story 'Always Just Behind' was featured in an anthology called 'When Darkness Comes,' and the publisher Crystal Serenades set up a booksigning in a haunted castle. When I signed my first book I was hooked.

Was there a person in your life who believed in you more than you believed in yourself? If so, who was that person? T
hat person without a shadow of doubt is my wife Janice. She has been there and believed in me since the beginning and goes on all my booksignings with me.

What advice would you give to writers wishing to have their works published? Write, write, write and never ever, ever give up no matter what. You will be rejected by every publisher under the sun. You will be pushed to the back of bookshops hidden from customers, when higher profiled authors are in the same store. But it will all be worth it.

Who is your favorite author? Kenneth Oppel.

Do you have an author website? What is it?
www.colinrparsons.com

What is your favorite quote?
Luck is: Preparation waiting for an opportunity.

****
Colin, thank you for the interview! Best of luck to you!
~Wendy
Posted by Author Beginnings at 9:46 AM

{Grab lunch and a book} 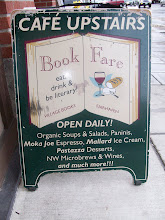 bookbeginnings (at) hotmail (dot) com
I review design books, home decor, inspirational, and self-help.
If you would like your book reviewed, please send me an e-mail. THANKS!

Book Lovers ... (Thanks for stopping by)

Write about your passion ....

Share your book beginning here and add this button to your blog/website!

{A blog by Wendy Christensen}